Our 39th Annual Choral Celebration Concert will be held on the Sunday after Thanksgiving, November 27th, at 4:00 p.m. at the Presbyterian Church of the Roses as part of their Roses Signature Concert Series. The church has lovely acoustics, comfortable seating, and plenty of parking across the street (Lucky’s parking lot).

In keeping with tradition, the choral ensemble Cantiamo Sonoma will once again be our guest.

We hope to see you there!

We’ll be performing our concert at the Presbyterian Church of the Roses (2500 Patio Court, Santa Rosa, CA 95405) as part of their Roses Signature Concert Series. The church has lovely acoustics, comfortable seating, and plenty of parking across the street (Lucky’s parking lot).

Our annual Spring Concert will feature all three groups of the Santa Rosa Children’s Choral Academy.

We hope to see you there!

The Chorus went on a performance tour to Germany, Austria and the Czech Republic in June 2016. Performances included the Wormser Dom, the wedding church from “The Sound of Music” in Mondsee, on the steps of the Schönbrunn Palace, a chapel in Esterhazy Palace, and more!

A Glowing Review from Singing in Europe

The Concert Group of the Santa Rosa Children’s Choral Academy took a performance tour to Germany, Austria, and the Czech Republic in June of 2016. While in Germany, they visited a small town in Carlsberg. It hadn’t originally been on our itinerary, but one of our members is a 5th generation descendant of a town member, and requested that we do a concert there. The following is a review from Die Rheinlandpfalz newspaper, Carlsberg, Germany. 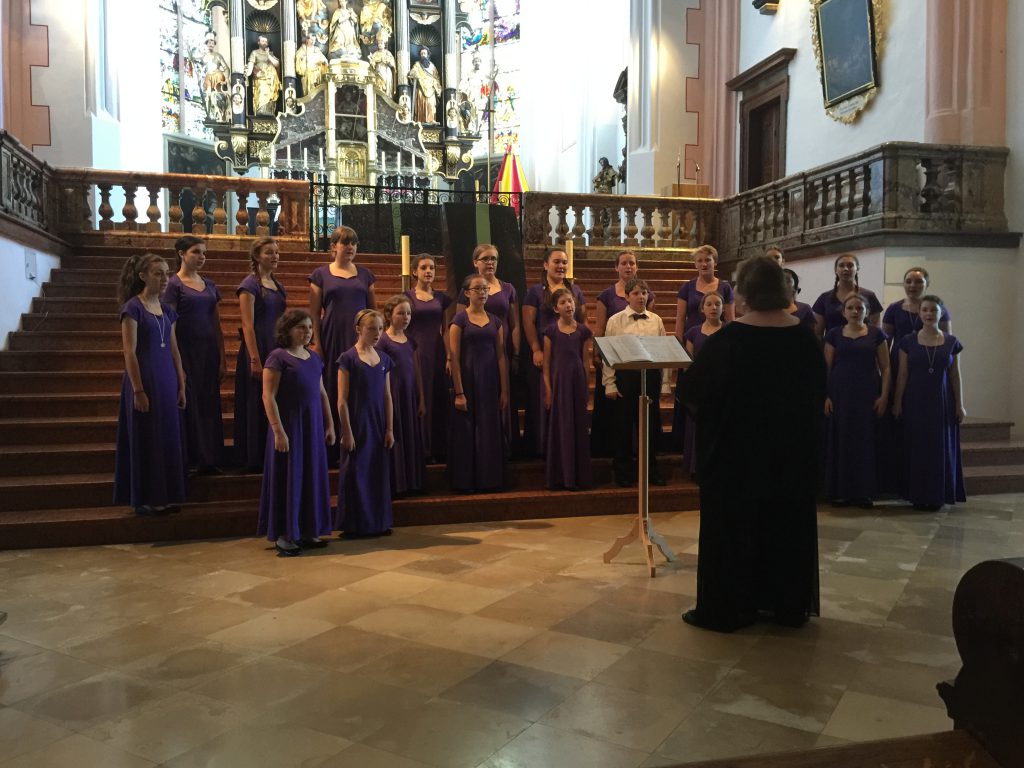 It was truly the finest of choral singing that the Santa Rosa Children’s Chorus from California brought to the listeners at the Catholic Church in Carlsberg, which was filled to capacity. 21 girls and one boy between the ages of ten and seventeen gave a noteworthy concert, performed in such cities as Salzburg, Vienna, Speyer or Worms, as well as Leiningerland.

Clear, trained children’s voices that had practiced many hours created a harmonic unity, with absolute sureness in vocal performance and text, as well as high concentration. With their eyes fixed on Carol Menke, who has led the chorus for 21 years, the young artists mastered even the most difficult passages. Whether in “Jubilate Deo” by Michael Praetorius, in “Cor meum” by Orlando di Lasso, or other choral pieces from the 16th century, the choir delivered a brilliant interpretation, with well-chosen phrasing in which the sopranos effortlessly and lightly mastered the highest pitches. This was especially heard in the classical piece “Lift Thine Eyes” (Hebe deine Augen auf from “Elijah” by Felix Mendelssohn-Bartholdy).

The children showed how a piece for instruments can be performed vocally in the Overture to “The Marriage of Figaro” by Mozart. In wonderful runs passing from voice to voice, imitating very different instruments and moving together exactly, the group succeeded in utterly fascinating the audience. The same was true for the Ukrainian Christmas carol, “Carol of the Bells”. The swinging of the bells could be clearly sensed through the changing and the comingling of the individual parts. The mood of the American folk song “Shenandoah” was full of feeling, almost melancholy.

In their rendition of a suite of South African songs, the chorus showed how flexibly they are able to interpret a great variety of musical styles. Especially in the rhythm was the typical mindset of the land brought out. The play between loud and soft created the effect. Thunderous applause was payment for this successful presentation.

Spirituals were offered at the end of the concert in memory of a departed friend of the sponsor of the Europe trip. In“Hush! Somebody’s Callin’ My Name” and in

“Precious Lord, Take My Hand,” the young showed that they can also master difficulties in this style. The courage and ability of two solo singers, who sang with delicate feeling and clear voices, was both amazing and convincing. The final chorus, “Ride the Chariot,” was the highpoint of the evening. Director Menke, a highly-trained soprano, soared with her children to the pinnacle. With her strong voice, she made the church quake. A standing ovation and demand for an encore was the reaction.

One audience member said it well: “I am so excited by these young trained voices. This large repertoire and everything performed by heart: it was totally incredible!”

In conversation after the performance, it was learned that memory training is also part of the three hours of practice every week. When asked if this wasn’t all very stressful, one singer answered: “It’s not stress for us. Singing is a joy!”